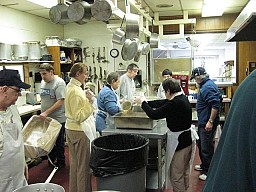 Family Kitchen
Volunteers from Saint Peter & Paul Church gathered at the Family Kitchen in Johnstown to prepare and serve a meal to the area’s hungry. Youth and adults gathered at the kitchen to clean, prepare tables, cook, serve, wash dishes, and clean up following the meal. The group of about twenty-one served 157 meals for lunch on Saturday, January 26. The effort is part of a charity called Saturday’s Kitchen, which is made up of area churches who have combined resources and volunteers to have the Family Kitchen open on Saturdays as well as during the week. SUNDAY SCHOOL CHRISTMAS PROGRAM
The youth of our Sunday School put on their Annual Christmas Program for the congregation on Sunday, December 30 following the Divine Liturgy. After all enjoyed the Luncheon served by our PTO, the crowd enjoyed the children's musical selection and the play. After the Program all welcomed "Saint Nicholas" with the singing of "O Kto, Kto" - "O Who Loves Nicholas the Saintly" and after receiving a bag of "goodies" from St. Nick all. Regilding of several liturgical items took place this fall:  The Eternal Lamp; Three Chalices; and a Censor.  All were donated by Dorothy Belz and Family MARCH FOR LIFE 2008
On January 22, 2008, the 35th Anniversary of the Supreme Court Decision Roe vs Wade legalizing abortion, faithful and clergy of the diocese from the Washington D.C., Pittsburgh, Johnstown, and New England deaneries travelled to Washington D.C. to participate in the Annual March For Life. Joining the Orthodox Christians For Life, the faithful processed from the National Mall along Constitution Boulevard to the Supreme Court, where a Panachida was served for the millions of pre-born children, lost to the sin of abortion since its legalization.

December Activities in our Parish

NEW VESTMENTS BLESSED
Before the Divine Liturgy on December 31, 2006 a new set of Festive Gold Priestly Vestments were blessed. These Vestments were first used by Father David at the Nativity of our Lord Feast Day services. The new Vestments were donated to our church by Mr. & Mrs. Tom & Tammy Pongrac in honor of and for the health of the Rabic and Pongrac families. The parish sincerely thanks Tammy & Tom for their generous gift and we ask blessings upon them and their entire families.
Powered by Orthodox Web Solutions
Home | Back | Print | Top